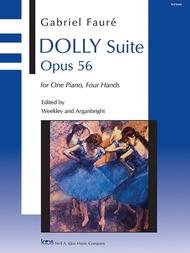 Born in 1845, Gabriel FaurÃ© is considered to be one of the greatest French composers of the nineteenth century. His family was not musical, being butchers , smiths and military officers, but they encouraged young FaurÃ© to develop his musical skills. He had excellent training from his teacher, Camille Saint-SaÃ«ns, who remained his lifelong friend. Dolly is a collection of six pieces written over a period of three years (1894-1897). They were composed in honor of HÃ©lene nicknamed Dolly, who was the daughter of FaurÃ©'s dear friend, the singer Emma Bardac. (Emma later became Debussy's second wife.) The opening Berceuse (Lullaby) suggests a moment of childhood peace and tranquility, perhaps Dolly rocking her doll to sleep. The second piece, Mi-a-ou is livelie; its title has been interpreted in two different ways. Emile Vuillermoz sees in it the capricious bounds of the favorite family cat, its quick turns, its zigzag starts, its sudden cajolery, after which...it at last rests in the lap of its little mistress. On the other hand, Marguerite Long, on the basis of her friendship with FaurÃ©, asserts that the title is the nickname for Dolly's brother, Raoul. The Le jardin de Dolly (Dolly's Garden) represents a quiet stroll through a lovely flower garden. The mood is smimilar to that of Berceuse but the melody is less predictable with sudden turns toward chromaticism. Kitty-Valse is a sort of companion piece to Mi-a-ou, but its rhythm is more straightforward, and we find many unexpected turns in harmony, Its strong accents contrast with delicate, swirling scale patterns. Marguerite Long tells us that Kitty is a corruption of Ketty' the name of the family dog! Tendresse (Tenderness) is the most touching piece of the set. It suggests a conversation between am other and daughter. In the middle section the two melodc voices are shared by the primo and secondo players in a canon form with bass accompaniment. The seconds half of the first theme features whole-tone effects. In total contrast to this gentle piece, the final piece is Le pas Espagnol (Spanish Dance), which Long says was inspired by a bronze equestrian statue that stood on the mantlepiece in Madame Bardac's house and was admired by young Dolly. Vuillermoz believes it depictsDolly pretending to be a Spanish dancer, wrapped in her mother's shawl.