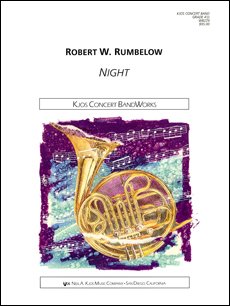 THE COMPOSITION -- This work is based on impressions evoked by the novel Night by 1986 Nobel Peace Prize winner, Elie Wiesel. The work is not a chronicle of the novel, but simply an expression based on select thoughts concerning the subject and composed with the intent on offering those who perform and hear the work another dimension through which to contemplate the atrocities of the Holocaust. The novel is an account of the Nazi death camp horror that turns a young Jewish boy (Wiesel) into an agonized witness to the death of his family, the death of his innocence, and the death of his God. Wiesel?s accounts of concentration camps and death marches evoke a gray, ethereal, almost other-worldly tonal scheme which provided the genesis for the work. --Movement I The Evening Air: 1941, sets a mood of eminent evil. A brief portion of the Kol Nidre, a prayer reserved exclusively for high holy days, is the text set to a simple and reverent original chant-melody. The excerpt of the text from the Kol Nidre should evoke a feeling of fasting or a meditative state. Both secular and sacred traditional Jewish music contain an altered dorian scale aspect and the trait of the augmented second. A motive from the traditional Hasidic hymn Avinu Malkenu III is quoted as a brief portion of this movement. The highlight of this traditional melody is the interval of the augmented second. The octatonic collection (used as the basis of composition in this work) contains many of the traditional features common to Jewish music. In fact, the interval of the augmented second is often renotated as a minor third (a defining feature of the octatonic collection) which is also the opening interval of Beethoven?s Fifth Symphony. During World War II, Beethoven?s motive represented a call for freedom and rallied the Allied forces throughout the war. Although this transformed augmented second appears from the beginning of the movement, it is highlighted towards the end. --Movement II Faith of a Child, is comprised of an original chorale which complements a traditional chorale melody associated with the pure and simple hymn Hiney Ma Tov. The text: Hiney ma tov uma naim, Shevet a him gam yahad. The translation: How goodly it is and how pleasant for brethren to dwell together. This movement is representative of the traditional faith held by those around the young boy, and the thirst for religious enlightenment and faith. The spiritual relationships of the youth become critical in understanding the ?night? which becomes his future. The key center of ?E? is retained from the first movement and refined as basically E minor. This represents the close relationship between the two movements on many levels. --Movement III Darkness Descends; The Never Ending Night (The Loss of Faith) traces the descending darkness, all encompassing, which, in confusion, devours faith in the eternal Lord. The Sephardic hymn melody Adon Olam is briefly quoted as a representation of faith only to be quickly and completely devoured by darkness (the loss of faith). The text of Adon Olam is as follows: He is the eternal Lord, who reigned before any being had yet been created; when all was done according to His will, already then His name was King. --And after all has ceased to be, still will He reign in solitary majesty; He was, He is, and He shall be in glory. --And He is One; none other can compare to Him, or consort with Him; He is without beginning, without end; to Him belong power and dominion. --And He is my God, my living Redeemer, my Rock in time of trouble and distress; He is my banner and my refuge, my benefactor when I call on Him. -- Into His hands I entrust my spirit, when I sleep and when I wake; and with my spirit, my body also: the Lord is with me, I will not fear. --The melody to Adon Olam is stated within a musical texture that represents the ?death marches? between concentration camps. With each ?step? the faith is diminished and the darkness becomes more and more pronounced until all that is left is torture in a chaotic and meaningless world devoid of faith. The Allegro section of the work is representative of confusion. Trains, marches, the military machine, etc. are all part of the layered energy of this section. The ending is reminiscent of the first movement, but should seem rather empty and devoid of life. The ostinato figure in diminution is not resolved at the end of the work, just as the novel leaves the author?s faith striped away and at an uncertain personal end.